In statistical terms, injury and death of pedestrians by bicycle compared to cars is insignificant (and I do understand the campaigning individual who's parter died would disagree - statisics aren't sympathetic).

Note that injury and death by cars were lower in 2020, probably due to Covid. Deaths in previous years were in the 250-280 region
Reactions: PC2017

oyster said:
whoosshh of wind and tyres can be quite unsettling
Click to expand...

I've had this, I didn't realise at the time but I was suffering, and still do but not as intense, from a mild form of PTSD, the sudden beep of a horn whilst walking would make me paranoid, the specialist just put it down to high blood glucose over a long period without medication.

I would hope most cyclists would slow down and wait to be acknowledged by the pedestrian before attempting a pass, it is what I do, some folks are lacking in common sense and common decency.
I definitely don't know much about anything, but I will have an opinion about it!
Yose 250w 26"(36v) front hub - 48v pswpower dolphin battery - 14a controller[Sinewave]
Yose 350w 26"(36v) rear hub - Rim cracked
Dillenger 350w 26"(36v) front hub - hall sensor failure
Reactions: guerney, trevor brooker and flecc

I prefer to use my voice rather than the bell or the Hornit. "Good morning, bike coming by on your left, keep going as you are" (aarrgh no Missus, other Left, ring finger side ). It's a bit more friendly.
Reactions: trevor brooker, matthewslack and flecc

jimriley said:
I prefer to use my voice rather than the bell or the Hornit. "Good morning, bike coming by on your left, keep going as you are" (aarrgh no Missus, other Left, ring finger side ). It's a bit more friendly.
Click to expand...

My preference is a single "ting" on the bell as I slow to near walking pace, then as they look round, giving a smile and adding as I slowly pass "Sorry to inconvenience you".

That always gets a excellent response.
.
Reactions: flash

richtea99 said:
In statistical terms, injury and death of pedestrians by bicycle compared to cars is insignificant (and I do understand the campaigning individual who's parter died would disagree - statisics aren't sympathetic).

Note that injury and death by cars were lower in 2020, probably due to Covid. Deaths in previous years were in the 250-280 region
Click to expand...

Just curious, are there figures for Pedestrians hit by [Pedestrians] ? 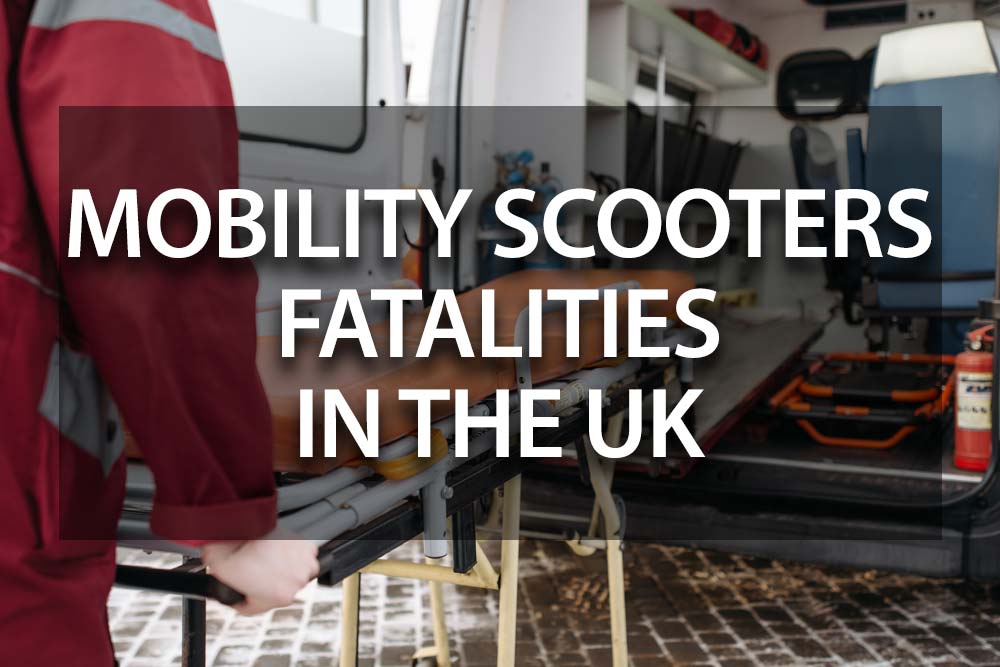 2017 - 2019 Mobility scooters fatalities A recent report revealed that 13 people died as a result of mobility scooter crashes in 2018. Data released in Autumn 2019 by the Department for Transport (DfT) has reported that 249 accidents involving mobility scooters were recorded in 2018 across Great...

StuartsProjects said:
Just curious, are there figures for Pedestrians hit by [Pedestrians] ?
Click to expand...

Near enough, just add the two together, since all cyclists and drivers are also pedestrians.
.
R

StuartsProjects said:
Just curious, are there figures for Pedestrians hit by [Pedestrians] ?
Click to expand...

Those stats are for road accidents only.

I think Pedestrians hit by [Pedestrians] counts as homicide.

it would only take 2 phone zombies running in different directions constantly checking there stravia app to hit each other as ppl are killed on mobility scooters going 5mph.

i just cant work out how you could kill someone on a mobility scooter unless you drove it off the 2nd floor in a department store and squished the person it landed on as my mums must be at least 50kg.
Haibike xduro all mtn pro 2014.BAEB.3.3

soundwave said:
i just cant work out how you could kill someone on a mobility scooter
Click to expand...

Any other vehicle colliding, being hard and heavy, will often throw a person aside, just injuring them. The scooter having little weight won't do that, and since rider and pedestrian are both about the same height, head to head hits will be common with skull fractures and brain injury.

A bit like a bulls-eye hit on a car windscreen but without the body slowing first that the car bonnet impact provides.
.
Reactions: PC2017
M

I have to agree about the speed bikes go at.
As said above, when I ride on my ebike my speed is generally around the 15 mph cutoff - sometimes a bit over on a nice road. Very few cyclists pass me and I catch up with most people in front of me.
Therefore I conclude that the vast majority of cyclists ride slower than I do - i.e. 10-13mph at most

OK proper fit cyclists on decent road bike can go faster - but there are not a huge number of them!


On another point - has he mentioned the extra massive funding for the Police in order to police these new laws - and probably the supposed red light jumpers that flood across every single set of traffic lights in the country (source - The Daily Mail - choose any edition - probably)
Reactions: jimriley and flecc

What is interesting about this cyclist bashing, is that whilst it would be appreciated by a certain type of driver, what would make a real difference to 'pedestrian' (and cyclist) safety, is a crack down on the daft\agressive\dangerous\speeding driving that we see on the roads from drivers on a daily basis. Vehicles kill a lot of people.

But a crackdown on Motorists is not a policy a car friendly party or government are likely to propose.
Reactions: guerney
M

anyone got a link?

OK proper fit cyclists on decent road bike can go faster - but there are not a huge number of them!


there are loads of them round here going round the country lanes i see groups of them every time i go out round here but there not faster than me and see less the more the years roll on seen more ebikes round here this year than ever b4 i think the days of the analog bikes are gone and will be just for kids bikes like when the 26inc wheel standard died.
Haibike xduro all mtn pro 2014.BAEB.3.3

StuartsProjects said:
But a crackdown on Motorists is not a policy a car friendly party or government are likely to propose.
Click to expand...

It doesn't seem to have been noticed in here, but there is a crackdown on motorists going on in conjunction with the aggressive promotion of cycling.

The new Highway Code measures to protect cyclists and pedestrians announced in January for example, coupled with the courts implementing huge fines in £1000s for breaches of its recommendations, some examples posted in here.

There's also been a program of reinstating speed camera operation. At one time with over half of them infamously non operational, that has been changing and around my area all the newer digital ones are suddenly fully active now. A number of unhappy local motorists have apparently discovered this when the letters arrive advising they will be penalised. However, it seems those exceeding the speed limit by less than 10mph are being offered a course in speed awareness instead of fines and points on licences.
.

soundwave said:
i think the days of the analog bikes are gone
Click to expand...

Only until they first discover the prices of good e-bikes.

Or until they first discover the price of a replacement battery.

Or discover the cost of repairing a new mid drive unit.

Or the cost of a new mid drive unit when it cannot be repaired.

And discover how often they need to change chains and sprockets on mid drive bikes.

Or suffer a several mile walk home with an e-bike too difficult to pedal without motor, or a mid drive with chain broken.

And discover that hardly any bike shops have a clue how to fix any e-bikes, mid drive or hub motor, so often make matters worse.

Once they discover one or more of these things, the new £99 push bike from discounter CycleKing or an LBS suddenly becomes much more appealing.
.
Reactions: Nealh

you should try the other forum they buy and sell 10k bikes like there fashion same as iphones and a new one every 12 months if that there fkn bonkers lol.

to them my bike is a fossil but it can go faster than all of them because my bike is shorter and lighter and geared to go 40 mph.

most new bikes you cant even put a bigger front sprocket on them so a dongle would be useless anyway as mine is like a 52t normal size chain ring.
Haibike xduro all mtn pro 2014.BAEB.3.3

soundwave said:
you should try the other forum they buy and sell 10k bikes like there fashion
Click to expand...

But they are cyclists. I'm speaking of the general public who think £300 is expensive for a whole bike so are appalled at the prospect of a £600 battery alone, or a £1000 mid motor replacement.

You hit the nail on the head mentioning fashion.

In the late 1980s golf suddenly became very fashionable, so four more golf courses were added to the four we already had on our doorstep. Even the kids were walking about with a bag of clubs. Now those courses are dead and empty most of the time and one of the clubs has become a wedding centre.

Later in the 1990s horse riding was the craze, new stables opened and convoys of horse were seen everywhere with both adults and kid learning. The newer stables dead and gone now and horses rarely seen about. One rider professing a new found keenness for riding I got friendly with in the local lanes, but now he's sold his hunter and drives a Westerham sports car instead.

Today Covid has brought a cycling craze, extending to e-bikes as people found that cycling was actually hard work, especially the daft way it's done in this country. But just wait 'til the things I mentioned come true to see how the fashion will pass.
.
Reactions: PC2017 and robert44

everyone over the years have said they would like to have a bike like mine until i tell them the price of it and the batt costs but back then the rrp of my bike was £5500 these days you have to spend double that or more to get the new latest forks sus ect.

The new Fuel EX-e is a full suspension 29er bike. It's only available with a carbon frame. The fork has 150 mm of travel...

£13.250 fook that and my bike would still beat it might look nice but it wont do what i want so no reason not to keep my bike going for another 8 years
Haibike xduro all mtn pro 2014.BAEB.3.3