This is about non-electric bikes, but could equally apply to elctric bikes.

My surrogate daughter and her husband both have cheap MTBs - the type with that pogo rear suspension and a Y shaped frame that you can buy new from Argos for £140. His had a bent crank, which stopped the derailleur from reaching the big chainwheel , a completely shot main suspension bush and a collapsed bearing on one pedal. Hers had dodgy brakes. They decided to taake advantage of the Government £50 voucher to get them fixed.

When they got there, the guy persuaded them that for an additional £30, they could get the top of the range gold service, which normally would be £80, so they went for it. After a few weeks of chasing, Halfords finally pronounced that the bikes were ready for collection. Upon arrival, she was ordered to pay an additional £34 and he an additional £53 because parts were not included in the £80 service. He'd had a new front hub, front gear cable and 7 speed freewheel. She had a new bottom bracket and brake blocks. they were both even charged for the little ferrules that they'd put on the ends of the cables. Bear in mind that Halfords sell those BBs for about a tenner and the horrible brake blocks for a few quid.

His bike was still completely unusable because of the collapsed pedal. Halfords said that they were unable to get the right pedal for it, even though the pedal was absolutely standard, and they were unable to get him a crank/chainwheel nor the knackered bearing replacemen even though the chainwheel is a standard square taper one. That cost him effectively £133 - £7 less than a new one and it was completely unrideable.

The first time she put her front brake on hard, something slipped and rendered the brake completely inoperative. They had fitted the weirdest cheapest brake block arrangement I have ever seen. It was virtually impossible to set it up right because the screw locked it in the in and out direction and the alignment with the rim direction at the same time. There were no spacers on it to fix its position and the clamp screw wasn't enough to resist the force of using the brake, which is why it slipped.

My house is half-way between Halfords and their house, so after giving up riding their bikes home, they came to me to see if I could help.

Luckily I have plenty of spare parts, so I replaced her front brake complete with a Shimano Acera one and I replaced his cranks with a similar but good one with nice pedals on it, so at least they were able to ride their bikes home.

To be fair to Halfords, they had trued the wheels, although not very well centred and got the rear gears working nicely.

The moral of the story is to be aware of what to expect when getting a service from Halfords. Parts are not included and even if they can't fix your bike, you'll still get charged maybe as much as a new one would cost. The other moral is that when your surrogate dad offers to fix your bikes for nothing, you should take up the offer rather than go to Halfords for your free Government funded service.

These are the brake blocks without the weird clamping arrangement: 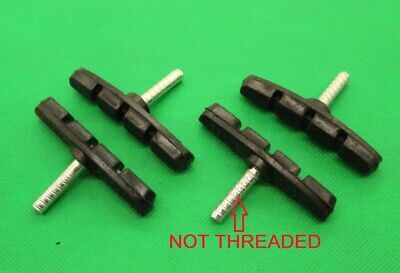 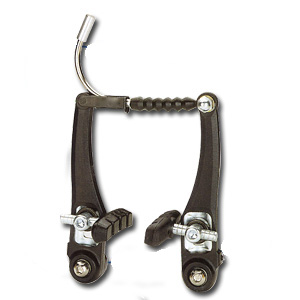 I was going to get my bike fixed at Halfords last week, then I read a ton of bad comments about them in a FB group and decided not to. A lot of similar stories to yours.
Reactions: Dope pedeller

The level of expertise available at any given Halfords store does seem to be variable. Some are good, some pretty dire, or so it seems. But you never know until you try your own local one out. Any fixed-price servicing menu I've ever seen at any bike shop covers labour only, with parts always charged extra.

I can't see it ever being worth taking a £140 bike in to a shop for anything - the labour charge alone doesn't make it cost effective (even with a free £50 voucher). Instead, many larger towns have collectives where your wreck-of-a-bike can be fixed up for free using parts scavenged from others. Our local Council tidy-tip actively side-lines all bikes brought in for disposal for the collective to use for parts or reinstatement and sale, or given to those who need but can't afford. Last time I was there, they had a 40' container almost full of them - many seemed quite usable just needing minor repairs/overhaul. Our Council (and others I know) also pay for a free to use mobile bike mechanic for 1 day a week - based outside the local railway station every Thursday. Provided your bike doesn't need major surgery, he'll do most things for free... but parts are still charged!
1) 700c Hybrid with Bafang MaxDrive 350w 80nm mid-drive 2) 700c Hybrid with TranzX M16GT 250w 60nm mid-drive
3) 20" Fiido D11 folding, 35nm Xiongda YTW-06 rear-hub
Reactions: Amoto65 and wheeliepete

It's not an uncommon issue with them.
Some time ago aprrox.2 years ago a work mate took his kids bike in for an assessment for repairs and was quoted about £100 +parts but couldn't tell him the final cost until they had fitted the parts.
Wobbly cranks, terrible braking, wonky wheels.

My workmate is quite useless and has no patience and decided it was too much as well as not knowing how much it may cost, so he bought it to me. I did the lot for £25 ,used no parts and even threw in the grease for free.

1. Wobbly cranks were simple, they simply needed adjusted to take up the loose bearing play. I stripped the BB out re-greased and tightened/adjusted correctly.

2. Brakes needed cable adjustment and some fiddling about, the boy was able to skid every where and he was well chuffed. I had to back off the front a little as he would have been over the bars.

3. Wheels needed hub cones adjusting but again not a hard job to remove and grease the bearings and adjust again.

I think I spent an hour with the spanners.

Those basic low end dual suspension bikes need constant attention and adjustment. Unfortunately Halfords aren't like a independent bike shop that would just say take it away not worth repairing because they sell such models themselves. I've spoken to staff in both Halfords and Cycle Republic and they take the longest time to setup and are frequently returned too. Sometimes it seems like the people who spend the least money have the highest expectations. I don't think they are allowed to replace poor performing parts unless absolutely necessary as there is no margin. I know they try to warn customers about such bikes and push them onto better models but some people don't have the budget . They are often bikes you can never get fully right.

That said we know stores like Halfords have some poor mechanics, they can have a high turnover of staff and sometimes of the year they are just swamped with work. It's a high turnover low margin business.
R

cyclebuddy said:
Instead, many larger towns have collectives where your wreck-of-a-bike can be fixed up for free using parts scavenged from others.
Click to expand...

Cycling UK holds Dr Bike sessions to fix your bike. However they've been stuffed by Covid for the past year, but I think they're aiming to get going again this year:

From 15 August, across the country, Cycling UK's Dr Bike events will be carrying out a bike ‘triage’ service: fixing minor repairs and checking to make bikes safe and road worthy. The majority of bike ailments can be fixed on the spot, meaning you can attend these events in the knowledge you'll...

Remember the test I did on a bike that I gave £5 for after I pulled it from a skip. I rode it 1000 miles without any maintenance at all - no oiling the chain, no cleaning, no adjustments, nothing. That was in January, riding it in snow, sleet, ice and everything else the weather could throw at me. At the end of the 1000 miles, the bike was a uniform sand colour, completely covered in salt. No expensive ebike could take that amount of abuse. That's if the chain and cassette could last that long, and I bet that the motor would have packed up too.
Show hidden low quality content
You must log in or register to reply here.
Share:
Facebook Reddit Pinterest Tumblr WhatsApp Email Link