Has anyone had recent experience of C&B Seen lights?

I've been a long-standing customer of C&B Seen, who readers may recognise as a UK distributor of relatively cheap Chinese cycle lights. I have had such a bumpy ride with their products for some years that I wanted to write about it, and to see if mine was an isolated sequence of poor luck, or whether the customer service issues are serious enough to warn folks off a risky company that may have gone to the dogs. The main issue appears to have been the company changing hands, with the old owner and customer service manager Roger apparently now gone.

In summary, I have doggedly tried to repair my lights when wires have failed, I have sent lamps back with strain relief problems or exit hole chafing. My latest problem was poor quality main-board soldering that resulted in an all-in-one unit failing to recharge, and then on top of that, it took over 2.5 months to get a replacement. It's not that there was a disagreement about replacing - they appeared to be willing to replace the lamp, and then sat on the problem for a couple of months. I received occasional vague replies, saying they were "away" or "back next week", but even now, when my lamp replacement finally arrived, several of my emails are still unanswered. One would imagine that if a company receives an email asking "are you still in business" they would be very keen to answer!

The old owner Roger used to reply usually within a day, and was happy to enter into lengthy correspondence about saving broken lamps/batteries from landfill, a topic I am also keen on. However, the new owners do not even sign with their names - they are just a faceless company name now - and the delays make me wonder if they are going out of business. For anyone who wants the long read, it is here.

you get what you pay for at the end of the day but when it comes to lights and how bright there really can be a big difference on what is stated it can pump out lm wise.

a better cheaper light would be this but the down side is it is not all in one unit but a lot more lm output. 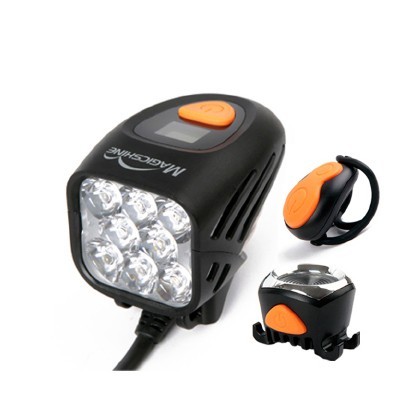 The Most power light from magicshine boasting a whopping 8000 Lumens from the front MJ-908 Bike Light. This is definitely one of the brightest bike lights on the market! Perfect for the serious mountain bikers. Just £169.99!
www.bikelightsuk.com
Haibike xduro all mtn pro 2014.BAEB.3.3
www.performancelinebearings.com​
Reactions: halfer
H

Yeah, I think I had a Magicshine at one time. I have tended towards the view that Magicshine and C&B Seen are serving the same segment of the market - cheap Chinese lights with a UK distributor and a UK warranty. The business model of both of them is, I think, to sell mediocre products in bulk and tolerate a relatively high rate of returns. Not environmentally friendly, but the financials permit the UK and overseas companies to turn a profit.

Indeed, so similar are the UK companies, I wonder if they would have the same manufacturers!