Not cheap but a bit different and made in China: 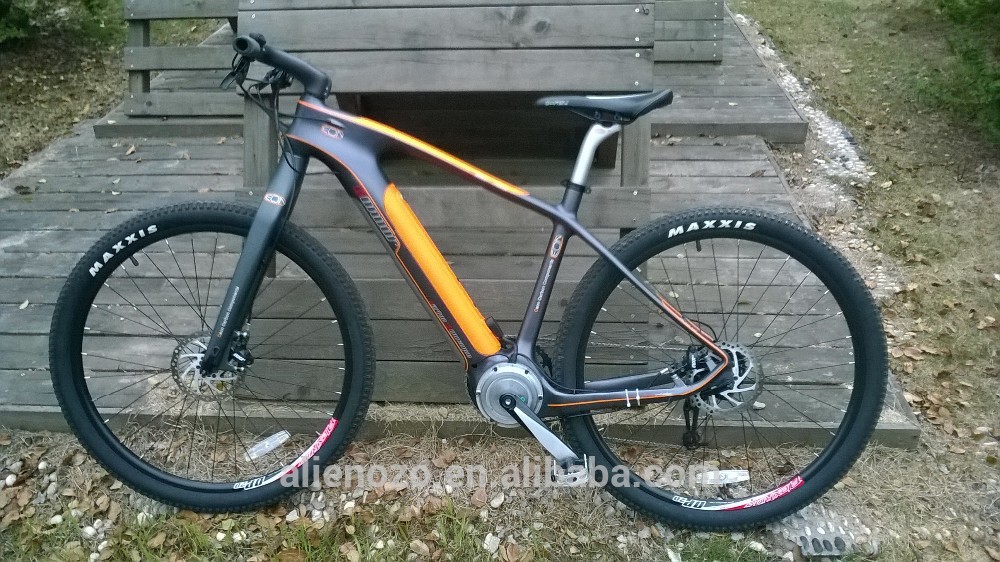 Neat and stylish, and not too expensive for what's on offer. Strangely concentric crank power units like this have never really caught on. Biketec had one on the Flyer F many years ago, and Optibikes feature a powerful one.

It would be interesting to know how this one performs.
.

I've tried a Bofelli crank-drive. It was about the same power as a BBS01 - not particularly powerful. Like the Bafang, they might have increased the power a bit by now.

Now that I've studied it, Ican see that it's the same bike as we've discussed before a couple of times. I first spotted it in Shanghai last May. $2500 plus shipping and duty, seems like a good price for the spec. (only 15kg). Spares might be a bit of a problem though. Better buy two.
Last edited by a moderator: Mar 28, 2015

Like d8veh I have seen that bike several times...it was presented at Shanghai by an Eastern European guy,he told me he was the designer of the M1 carbon bikes I saw at Friedrichshaven. I found him a difficult guy to pin down on price,spec,plans,delivery...he seemed more interested in the technology than making a business,so I lost interest.
I saw the same bike at last years bike show at the NEC,shown by a company I think was named Madhog,same story really they hadn't thought through the marketing,they didn't know whether to direct sell or though shops and had no price.
The Bofeili motor has been around for maybe 5 years,I visited their factory in China,a lovely family business...Mum does the books,Dad was the engineer and their daughter the marketing....but I felt that despite a lot of enthusiasm they lacked the infrastructure to give confidence in their product,it was not powerful and the BPM hub was simpler and cheaper and backed by Bafang technology.
Whilst I liked the bike,the guy wouldn't let me test ride it and he was talking about changes before he released,it seemed a good prototype not a production bike.
The bike was nicely styled,it was light but at this price level you do need a very professional presentation to give customers confidence to buy and nobody has done that.
KudosDave
For E-Bikes with style visit www.kudoscycles.com
Reactions: Crockers and RobF

Ah, so it was the same one I saw at the NEC last year.

Like KudosDave, I had a bit of a non-conversation with the guy on the stand.
Riese and Muller Charger GX Rohloff
Rose/Bosch 29er trekking bike - now sold
Brompton Nano - now sold
AVE MH7 semi-folder
T

They have upgraded their motor's power to 350W. IIRC, it has built in controller and torque sensor.
It is ways better designed than the lightweight Annads and most German bikes out there. Integrated handlebars + console, battery + downtube, motor + BB.

What do you think is the right price?
Admin note for clarity: While this is a personal user account, the Trex account has an association with Woosh.

Price is a hard one, it's a no name bike, but if you slapped a Stromer sticker on it, it would be £4K.
Riese and Muller Charger GX Rohloff
Rose/Bosch 29er trekking bike - now sold
Brompton Nano - now sold
AVE MH7 semi-folder
T

how much would you say the price should be if you put a different sticker on it?

1. FWG
2. Kudos
3. Volt
4. Woosh
Admin note for clarity: While this is a personal user account, the Trex account has an association with Woosh.

http://bofeilinz.com/ Comes from New Zealand can't be too bad...

The problem about pricing is that it is an unknown brand. If it come to market by a new brand it would struggle to sell much above £2k,it would be a hard sell even at that price,most customers would prefer an ally KTM over a carbon XYZ.
If it had a KTM name on it,probably £3.5k.
But in the UK there is a very limited market for anything above £2k.
Therein lies the problem,there are some really nice bikes at about £1.3k to £1.7k,most UK customers would say,why pay more? Which is probably the reason why such bikes never come to market,you can't sell them for what they cost to build,certainly not make a profit.
I question that 15kg weight,I picked it up at Shanghai it felt heavier than that.
It's questionable whether carbon frames have a place on an e-bike,the ally frames are quite light now and it's hard to make a big percentage weight saving using carbon. I think savings on motor,wheels,battery weight would be more cost effective.
The M1 bike I saw at Friedrichshaven was about £5k,it was an off road bike competitor to the Carbon Haibike,I was tempted to bring one over as a flagship bike but my head said it would sell slowly.
KudosDave
For E-Bikes with style visit www.kudoscycles.com

trex said:
how much would you say the price should be if you put a different sticker on it?

Trex,you need to add KTM or Kalkhoff to that list.
For E-Bikes with style visit www.kudoscycles.com

This thread reminded me to have another look at the german M1 bikes....www.M1-sport technic.de. All their bikes are full carbon,I quite liked the Erzberg...it was an off road style bike,long suspension travel (120mm),very tough,a Haibike competitor....it was available as a non electric,pedelec...250 watt x 25 kph and s-pedelec....350 watt x45 kph, there was a 500 watt version,not cheap the pedelec was £5k. It had a very small lightweight battery,maybe only 4Ah from memory.
They had another bike called the Sedan which split in half for stowage,transport.
All seemed a bit expensive for the UK.

if you were to take this on, what do you think the UK market for it is? 50 units a year may be?
Admin note for clarity: While this is a personal user account, the Trex account has an association with Woosh.

trex said:
if you were to take this on, what do you think the UK market for it is? 50 units a year may be?
Click to expand...

What at £2k?.....,maximum 10 bikes and probably from harsh reality when in the past I have been a pioneer on a particular product (not necessarily bikes)maybe only 2 or 3 bikes. But I wouldn't build a carbon frame e-bike for reasons I have already stated above.
For E-Bikes with style visit www.kudoscycles.com
T

you are pessimistic, I think.
The total market for £2k-£2.5k bikes must be more than 5,000 a year in the UK.
Don't think of the Bofeli motor for a moment, just keep the look of the bike like it is, carbon frame is smooth and takes on the paints like no alloy frame can, put in a (stalkingcat's oil filled) BPM CST in the back. Can you sell it for £2k? it's bound to be competitive against most £2k bikes out there.
Admin note for clarity: While this is a personal user account, the Trex account has an association with Woosh.

The main thing that would put me off is the integrated display. It stops the rider from ever changing the handlebar and stem should they so desire. Whilst I hate most consoles that are fitted to e-mtb's, integration such as that is not the way to go.

Kudoscycles said:
This thread reminded me to have another look at the german M1 bikes....www.M1-sport technic.de. All their bikes are full carbon,I quite liked the Erzberg...it was an off road style bike,long suspension travel (120mm),very tough,a Haibike competitor.
Click to expand...

Is that the bike with the underslung battery that is going to catch every stone, debris, mud and water that's thrown up at it. A design disaster.