The Institute of Transport Economics in Norway this month unveiled the results of its electric bike study, concluding that electric bikes dramatically increase cycle journeys, with women in particular making more cycling trips. 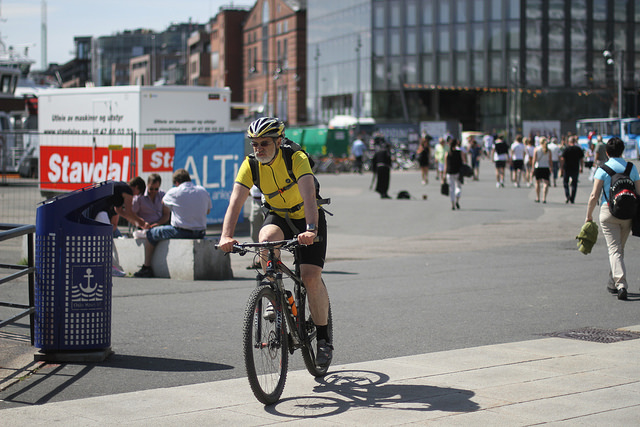 “People travel twice as much on the electric bike, both in terms of kilometres, amount of trips, and as part of the total transportation,” according to Aslak Fyhri of the Institute of Transport Economics.

The experiment group of 66 people swapped an ordinary cycle for an electric bike for the study period, as part of research into people’s transport patterns. In parallel with the UK, increasing the use of bikes (to reduce reliance on cars) features on the country’s political agenda.

The study results concluded that those in the e-bike group used their bikes much more than those in the 160-strong group using their own ordinary cycles.

Prior to the study, people in the experiment group use their ordinary cycle for only 28 per cent of their travels. Fyhi explained: “After they started using an electric bike, nearly half of their transportation was done by bike. Even though the participants cycled more than the average Norwegian in the first place, this is a major increase.”

Data recorded by the e-bike, alongside travel diaries, showed that e-biker daily trips increased from an average of 0.9 to 1.4 trips, with the average length of trip more than doubling from 4.8 to 10.3 kilometres in addition.

Fyhri noted: “The effect of having an electric bike was particularly strong among women. They did far more trips with their e-bikes than men did. Men, on the other hand, often went for longer trips once they were out cycling.”

When asked if the increased use of an e-bike could be demonstrated longer term and beyond the few weeks of the experiment period, Fyhri responded to Pedelecs: “We have in fact just tested this issue with a new data set that we collected last year. The results are not published yet.  The preliminary results are that when people are allowed to use their ebikes for a longer period, they increase their bicycling even more. The data we used this time were from people who actually purchased a bike, not test people in an experiment.”

Inadequate cycle paths, traffic safety worries and the impracticalities of commuting in workwear were noted as obstacles to increased cycle use in Norway. Similarly again to the UK, e-bike sales have soared, although still a niche market within the cycle industry as a whole.

The Norwegian Information for Gender Research further explores how electric bike use can benefit women, noting that the ‘typical Norwegian cyclist’ is a MAMIL (middle aged man in lycra). The organisation say that this typical stereotype “cycles fast and aggressively and shows no considerations”.

Fyhri believes the “stereotypical workout cyclist is a man and the everyday cyclist a woman” in Norway. However, he adds: “I don’t think workout cyclists… keep anyone from cycling. However, I do think that the yellow jacket and the lycra is a symptom implying that there is something wrong with our bicycle road network.”

His comment stems from the theory that men generally take more risks than women in traffic while women are deterred without the safety of well developed, and particularly off-road, cycle paths. Quoted in the study write up are conclusions reached by Australian bike researcher, Jan Garrard, who found that the majority of cyclists in areas with poor cycle infastructure tend to be male, whereas in places where people tend to use their bikes for transport more, women make up a larger proportion. Garrard’s 2007 paper concludes “females showed a preference for using off-road paths rather than roads with no bicycle facilities”.