Still awaiting mine, after my Haibike died in September (Allmtn pro) my bike shop has shown themselves to be awful at any form of customer contact help etc of any help at all, focus orders in March, due April 20th, chased, was due for delivery Friday before the bank hol, chased again, now its 2 weeks - that's if they ordered it at all, TEC pack is supposedly on back order until June, not sure how much I believe any more, been awful from start to finish

Just thinking if my Bosch motor dies I'd just replace the motor?
M

N.b. I appreciate that can look like sour grapes on a long delivery but they combined with £300 overcharge on the initial order (refunded) because they sold standard Nyon as a bolt on option, then the bike got damaged, handover was handing it to me through a half open door, picked the bike up, battery fell on to the floor and got damaged, given a replacement, decals were then half one colour (on the bike) half another colour on the battery - got changed, brakes were not set up well so sorted them, same with the gears (I'm fussy about gears working but also know how to set them up well), bike died,
Then followed months of chasing them, Haibike, Raleigh, offered a new bike for xmas, then Jan, then march,
on the 16th of March my bike, confirmed as the 20th.......moved to may/June.
Now the focus, month plus late and I'm doing all the leg work, I'm minding my language to keep this a nice forum but I'm sure you am an imagine my feelings


Sent from my iPhone using Tapatalk
Reactions: LeighPing and Steve A

Monoblock said:
I'm minding my language to keep this a nice forum but I'm sure you am an imagine my feelings.
Click to expand...

I can imagine how you feel after shelling out like that. At least your new avatar has arrived on time.

Monoblock said:
N.b. I appreciate that can look like sour grapes

Sent from my iPhone using Tapatalk
Click to expand...

This is an internet forum, what else is it for.

In your top post did the bike or battery break and you have ordered a Focus as it's not clear.
Haibike Sduro SL 29
Reactions: LeighPing
M

The original bike was a Haibike AllMtn pro, after a Nyon software update is ceased working, the shop and Raleigh could not get it working., months then ensured of no deliver after 3 separate collection appointments were cancelled when it failed again.
When dates moved to May /June and a few reviews of the new Boltron forks were not that great for a £6k bike I decided to hop brands but became limited to what they could provide or I'd have gotten a Scott.

I got the bike through Amazon as I had a lot of vouchers - long story, work bonus scheme that I purposely took as Amazon vouchers to get an EBike with as I could have John Lewis, Homebase, love2shop etc, the shop sold on there and I went to see then and got them to list the bike so I could buy it there.

As for the shop, legally they can cite a broken relationship to then not supply the goods so I'll put a dedicated post up as and when I have my hands on the metal, very factual to avoid liable but I'll put up the details.


Sent from my iPhone using Tapatalk
Reactions: Steve A, IR772 and LeighPing
E

That's a bummer on both counts.
M

The Focus is in place, bloody thing came with a European plug and German instructions but I'm survive.


Sent from my iPhone using Tapatalk
Reactions: Earthskyouch20 and LeighPing

Monoblock said:
The Focus is in place, bloody thing came with a European plug and German instructions but I'm survive.

No money left for a camera?
Reactions: RobF
E

It's an ace piece of kit. Loving mine.
Easy enough to find another cable to fit the charger or chop the one that came with it and put a UK plug on.
Reactions: LeighPing
M 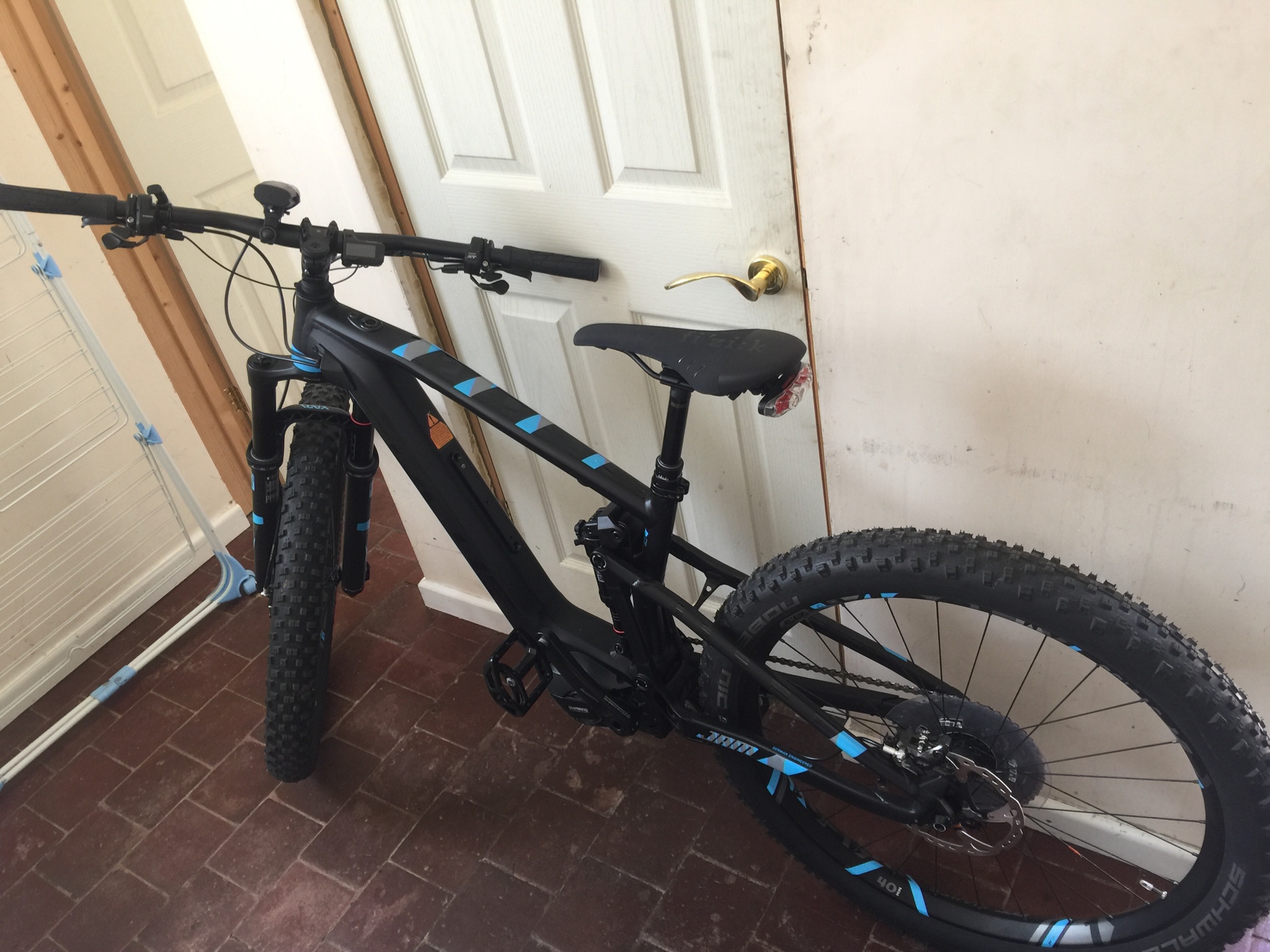 Like the black paint. Full Di2 to boot! Interested to hear how you get on with that.
M

I actually like the grey but the shop ordered black due to availability and I just wanted a bike back in truth.

The Di2 is good, hits gear each time with no messing, going to look in the settings to turn off the annoying bleep that tells you you are already in top/bottom gear and can go no further.
For me the bike is geared that at my normal cadence I'm 17/18mph so not using any batt aside from uphills and pull sways but that does mean you quickly notice the big tyres, rear sus unless locked and weight, but means that the 360w batt is of no issue.

Battery is supposed to be 378wh so a little better than the early advertising and I have found it's duration seems to be improving the more rides I put in. I have found similar behaviour from RC Lion & LiPo packs in the past too taking a bit of time to 'bed in'.

I know what you mean about the bike feeling 'draggy' when the motor cuts. I have stopped and started again with the motor off thinking it may not have decoupled. Think it has more to do with you pushing a higher gear with the motor assist and it feels hard work when I cut out. I now just drop back a gear or two and all is ok.
The bike rides well without the motor like you say. If I am going on a longer ride I only use it going uphill then turn it off on the flat.
It comes into is own on techy & downhill trails where it feels less like the other eMTB's I have ridden which fits in with the riding I generally do.
Reactions: Earthskyouch20
S

Does the Jam2 come with the TEC Pack or is this an optional add-on? I've rang a few dealers in the north-east and they're not sure.
S

Eckythump said:
Had the first blast on mine yesterday. Took it round the full loop at Hamsterley Forest.
Used half the pack riding predominantly in eco though it did have a thrashing in boost when my buddies sessioned it round 'Odd Sox' to see what it was like and dragged one of them up a hill in trail mode.
The STEPs system behaves like the Brose with a bit more poke. Smooth immediate build up in torque rather than the nothing, nothing , wallop of the Bosch.
Noise level falls between Brose & Yamaha. More high pitched than the Yamaha powered Haibike that was with us.

Pleased with it so far. Was going to use the purchase reward points from JE James to get the add on battery but not so sure I need it now. May use them for a Gucci rear shock instead.

How many miles would you say you get with just the standard internal battery in Hamsterly Forest? The Jam2 Plus (£3600) is a very attractive price.
M

Tec is not standard but instead a bolt on option- comes in a big add box with the battery and a joint to put a water bottle cage on, I'm sure the next comment will be to say they would prefer to choose a cage but at the price I was shocked that it did not come with a cage, just a cage mount - seemed a but cheap on their part but hey ho.
Got the bike in June and committed to 100km run in July which I did but I injured myself (IT Band) and ran through a lot of pain and have not recovered enough to get on the bike after all this waiting!
More reviews soon I hope

Sean Hudson said:
How many miles would you say you get with just the standard internal battery in Hamsterly Forest? The Jam2 Plus (£3600) is a very attractive price.
Click to expand...

It really does come down to how hard you push on the climbs and who you are riding with.
If we go up with mates on regular bikes where you potter up the hills you could do two loops of the three main hills (Pikes Teeth, Transmission & Descend) without a problem.
If the two of us on ebikes go alone and hammer up everything you are looking at one loop of the above and an extra hill. A couple of hours smashing up & down Danny's Descend will wipe out the battery.
I have had the TEC pack on order since I bought my bike back in late spring and it still hasn't turned up. To be honest I haven't really missed it. There is enough for an afternoon's trail bashing in the trail setting or you can do 30 miles or so in eco including a couple of climbs of the Cleveland Hills.
It looks like a longer travel version is on its way called the Sam2 if you fancy that.

Ignore the presenters comment about how the power comes in when he is riding the bike as he is using it in boost. The only time I use boost is in trials type steep climbs where you go from track stands to popping the front wheel over obsticals and you want instant full torque assist.
All other trail riding is in eco or trail where the power assist feeds in smoothly.
Full assist is available in trail mode and is a far more natural feeling than using boost.
Reactions: LeighPing
Show hidden low quality content
You must log in or register to reply here.
Share:
Facebook Reddit Pinterest Tumblr WhatsApp Email Link