Oxford Brookes University led a three-year study into supporting and prolonging cycling among the UK’s older population, the key recommendations of which have just been published.

A representative for the University said: “The research has found that older people who currently cycle, or who have tried cycling, recognise the positive benefits it can make to their health, however they find infrastructure in the UK generally unsupportive of their needs.” 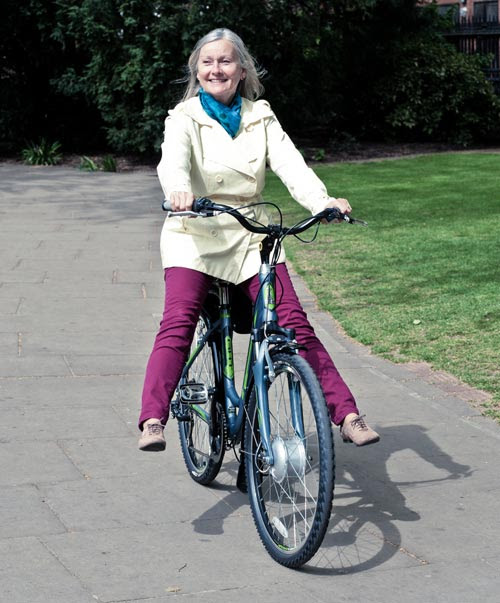 The study involved participants from Oxford, Bristol, Reading and Cardiff taking part in an eight-week ‘cycling and wellbeing’ trial involving electric bikes. The group pledged to cycle for at least half an hour, three times a week. Participants were made up of those currently cycling, non-cyclists as well as a group of people who wished to take up cycling again after a break.

Study participants were asked to keep a diary during the trial, as well as complete a survey several months later to see if they had continued to cycle. Around two thirds of the group thought their wellbeing had improved and that they had become more physically active. On average each participant made 30 separate journeys, with many cycling more than the required 90 minutes each weeks and going on to purchase an e-bike once the trial period ended.

Key recommendations from the study include promoting the benefits of e-biking and working with the government to improve affordability with incentives (tax benefits and battery replacement schemes).

Perhaps unsurprisingly however, although cycling has the potential to improve physical as well as mental health, those on the trial felt the road infrastructure in the UK was generally unsupportive of their needs and lagging behind other European countries.

One person on the trial, described as in her fifties, mentioned a lack of a continuous, dedicated cycle path in her urban area: “It’s not like driving, when you’ve always got a lane.. sometimes you’ve got a cycle lane, sometimes you’re among the traffic and sometimes you’re in a dangerous spot in the middle of the road.”

Other cyclists, noted as ‘resilient riders’ by the study, used other strategies to cope with declining capabilities, such as avoiding peak traffic periods, keeping away from motor traffic as much as possible, adapting their bikes and even riding on the pavement. Some purchased high-visibility clothing and handlebar-mounted mirrors.

Dr Tim Jones of Oxford Brookes University said: “While the issues highlighted are relevant to all cyclists, they are more acutely felt in an ageing cohort as capabilities change and previously easy activities become more difficult. The way our towns and cities are designed, as well as cycle technology, needs to consider the diverging capabilities of different users, if cycling is to be embedded in the lives of an increasingly older population.”

The study concludes by adding to the calls for a more dedicated infrastructure for cyclists across the UK’s towns and cities, saying that a “series of recommendations have been presented to policy makers, and more specifically planners, engineers and designers, health promoters and the cycle industry on the part they could play in supporting older cycling as part of a broad, age-friendly city agenda.”

Dr Jones added: “Our study reinforces the need for cities to plough ahead and create a dedicated infrastructure for cycling along major roads, implement slower speed zones and support the growing market of electric bikes. Interventions targeted at promoting older cycling will not only support healthy ageing, but it will also support younger cycling and help address the pressing issue of low levels of fitness and growing levels of obesity amongst the nation’s younger population.”

Martin Brown of E-Bike Shop is one retailer benefiting from the surge in popularity noted by Dr Jones, having just completed work on a 5,000 square feet expansion to their Farnham sales and distribution centre. The need for increased space was a result of outgrowing the previous expansion just 2 years ago.

Over at Hampshire-based Byocycles, Zack Pollard said: “The Electric bike market has flourished in the past year; our sales are up 124% on last year, we’ve had to expand premises both in the UK and China to keep up with demand. Improved infrastructure for cyclists would only help all kinds of cycling continue to grow.”

Juicybike have also told us they’ve experienced “considerable growth” but echo what study participants have said on infrastructure. Sarah Wales told us: “From talking to customers, there are a large group of people who would use their bikes far more for local journeys if they felt safe. So many customers – women in particular – tell me that they are happy to ride in Europe, on separate cycle lanes, but only ride in the UK on designated cycle trails and country parks. For e-cycling to fulfil its true potential as the most sustainable and flexible local personal transport option for many people and to allow cycling uptake to get beyond the “MAMILs” we need all riders, young and old, to feel safe riding in villages, towns and cities.”

Sarah continues by adding: “We already know from research that when good infrastructure is in place, women ride more. And, with the latest high court ruling telling us that the government’s existing plans to tackle air pollution are woefully inadequate, better cycle infrastructure is something that would improve quality of life for all.”

Whilst the growth in e-bike sales continues across the UK and the rest of Europe, for some in the study it was their first time on a power assisted bike.

The comments from the study group portrayed a common theme; e-bikes offered “sheer enjoyment” as well as offering a certain degree of freedom and flexibility to move around whilst providing exercise. Participants often commented that they had replaced short car journeys with cycling and travelled to places and distances previously unimaginable.

“It was good exercise [riding the e-bike] and I felt that I’d really accomplished something. If you’d suggested this to me a year ago I’d have dismissed the possibility of cycling this distance out of hand.” Harvey, 60s, Oxford

“Really enjoying the time on the e-bike. Beginning to wonder if I will find my own cycle hard work. Feel fitter and sleeping extremely well.” Amanda, 60s, Reading

“I’m using high levels of assistance for practical trips to the shops and lower levels of assistance for my 22 mile ‘get fitter’ rides. I feel the rides are getting a bit easier and the average speed is creeping up, so maybe I’m getting a bit fitter which is one of the benefits of regular cycling… so that’s really good. Lost 5kgs.” Padraic, 50s, Reading

“Odometer now indicates 511 miles. I would never have achieved this on my pushbike, not even contemplated doing the journeys I have done. There was always consolation in the thought that, if one became weary, there was always help from the motor to get you home, albeit with pedaling.” Ulrick, 80s, Oxford

“I feel more confident now with the e-bike. I am discovering that it makes me feel safer in traffic and at traffic lights to get off to a good, wobble-free start. It’s especially good on an uphill start.” Colline, 60s, Oxford.