A University of Leeds study published this week has found that electric bikes have the capability to cut car carbon dioxide (C02) emissions in England by up to 50% if used to replace car travel.

CREDS (Centre for Research into Energy Demand Solutions) was established in 2018 to work with businesses and policy makers to improve energy efficiency in the move towards lower carbon energy use.

The researchers found that the greatest opportunities for the role of electric bikes are in more rural locations and areas outside of cities, which tend to be more dependent on car use and with fewer public transport options. Journeys within cities are generally shorter and the study notes that “city dwellers already have many low-carbon travel options, so the greatest impact would be on encouraging use outside urban areas” where e-bikes could have a greater net effect on CO2 reduction.

On average, for every person using an e-bike to replace all their car journeys, they could save 0.7 tonnes CO2 each year, according to the study. Whilst the researchers say this would require a big shift in behaviour for some, they add: “E-bikes are different to conventional bicycles. E-bikes have considerable range. We need to get out of the mind-set that only very short distance trips are possible by active modes” referencing Denmark’s policy of supporting longer distance (more than 5Km) commuter cycling. “They are not just building cycle/e-bike lanes in cities they are building routes from the city to the towns and villages.”

CREDS recommend that electric bikes are acknowledged as a “strategically important mode of transport within key transport policy initiatives in 2020,” with recovery from COVID19 reducing car dependence as part of carbon reduction programmes.

E-bike promotion schemes and pilot programmes in the government’s COVID19 economic recovery stimulus plan could incentivise the replacement of car travel with electric bikes, say the researchers. Their study charts the benefits for those vulnerable to increasing costs of motoring in areas of low incomes, whilst areas of higher incomes often tend to have high transport C02 emissions, improving both mobility and air quality.

In terms of how the general public could be encouraged to change travel behaviour, the researchers point to one example of an electric bike loan scheme in Brighton, where participants replaced 20% of private car travel with an electric bike for a variety of purposes for the 2 month trial. Of the 80 employees taking part, average usage was 15-20 miles per week, with 70% saying they would like to cycle more if an e-bike were available for future use. Those results were cited as consistent with other European studies showing that “when e-bikes are made available, they get used; that a proportion of e-bike trips typically substitutes for car use; and that many people who take part in trials become interested in future e-bike use, or cycling more generally.”

In looking at where car journeys could be replaced by electric bike, the study published a diagram showing where e-bike usage fits into a sustainable transport hierarchy. 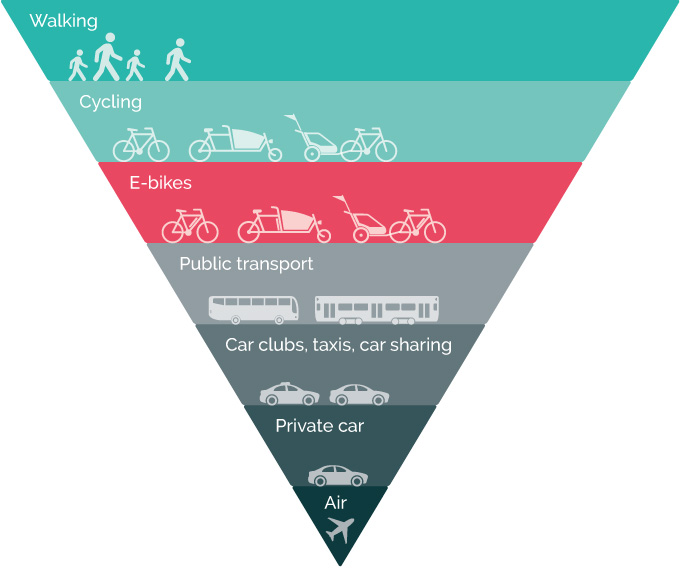 Dr Ian Philips, who led the study, told Pedelecs: “In the short term I hope this work encourages policy makers to think of e-bikes as a strategically important mode of travel which are capable of halving a person’s car CO2 emissions.

“I hope e-bikes are included explicitly in the UK government’s Transport Decarbonisation Plan.

“In this climate emergency we need to turn our thinking around. Policy makers need to move beyond the changes they think people would like and instead plan for a transport system which reduces its CO2 emissions.  E-bikes have the capability to provide radical reductions in CO2 emissions whilst still providing an equitable way to get around for many people.”

Philips, I., Anable, J. and Chatterton, T. 2020. e-bike carbon savings – how much and where? Centre for Research into Energy Demand Solutions: Oxford. https://www.creds.ac.uk/publications/e-bike-carbon-savings-how-much-and-where/