Brexit, for once some facts.

GLJoe said:
I've just downloaded the spreadsheet as well and I'm looking at table 4 as instructed.
The figures seem to match up.
what do you think is incorrect in the graph ???
(or the interpretation of the data ??)

Check the numbers and do a bit of math yourself.

This is a plot I made from the downloaded Table3.
The magenta line is the death rate per 100,000 for the unvaccinated, the yellow line is of the double dose. It's clear cut. 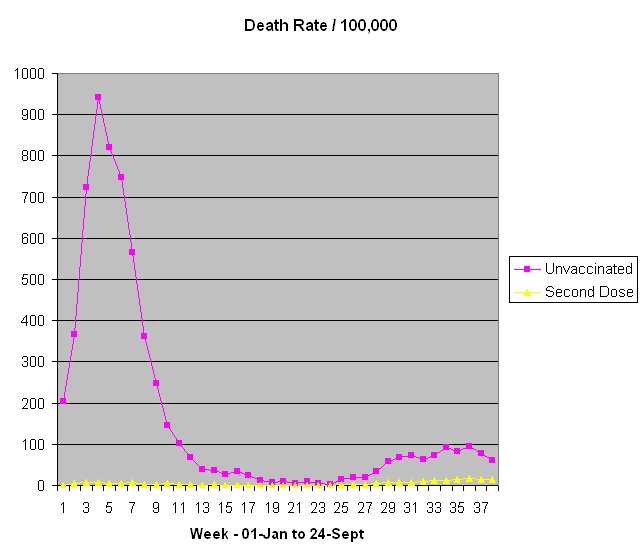 Now specifically for comparison with the graph that Joe posted, here is my plot for the group 10-59 years old who normally can cope without vaccines*. Even so, there is a clear benefit to take the vaccine: 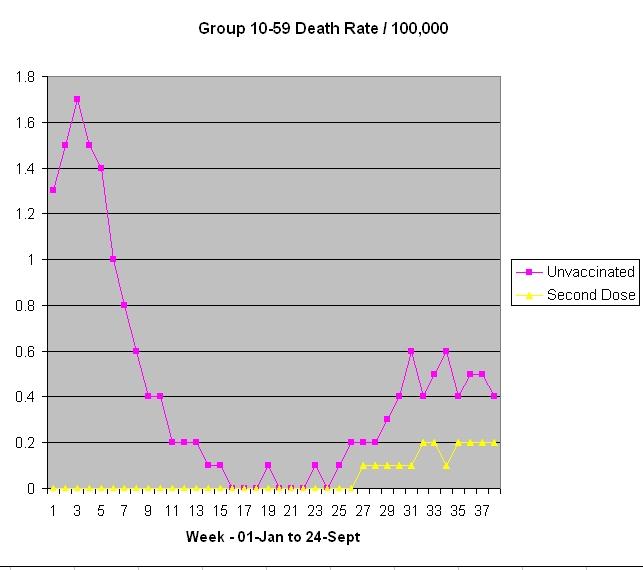 That sure as hell isn't unique at moment.
Reactions: oldgroaner and oyster

Giving Oxford jab to elderly could be why Britain has so far avoided virus crisis hitting Europe, say experts

I thought Tigger had been used for Hancock?

We don't want no tigger as PM. We want a mature, moral, law-abiding, intelligent, thoughtful person with a high level of leadership skills - both with colleagues and to the entire country.

Condensed: Get lost Johnson and take Raab with you.
Giant Full-E+2 (2017)
Reactions: flecc and Woosh

But it's good BRITISH BS
And doesn't come with a Sermon from Pravda every time.
Reactions: jonathan.agnew, Woosh and oyster

Giving Oxford jab to elderly could be why Britain has so far avoided virus crisis hitting Europe, say experts

Well it's in the Telegraph so it must be right
Heh heh heh (shuffles papers) forgive me, etc
Reactions: oyster, flecc, Woosh and 1 other person

And I was moderately pleased to see: 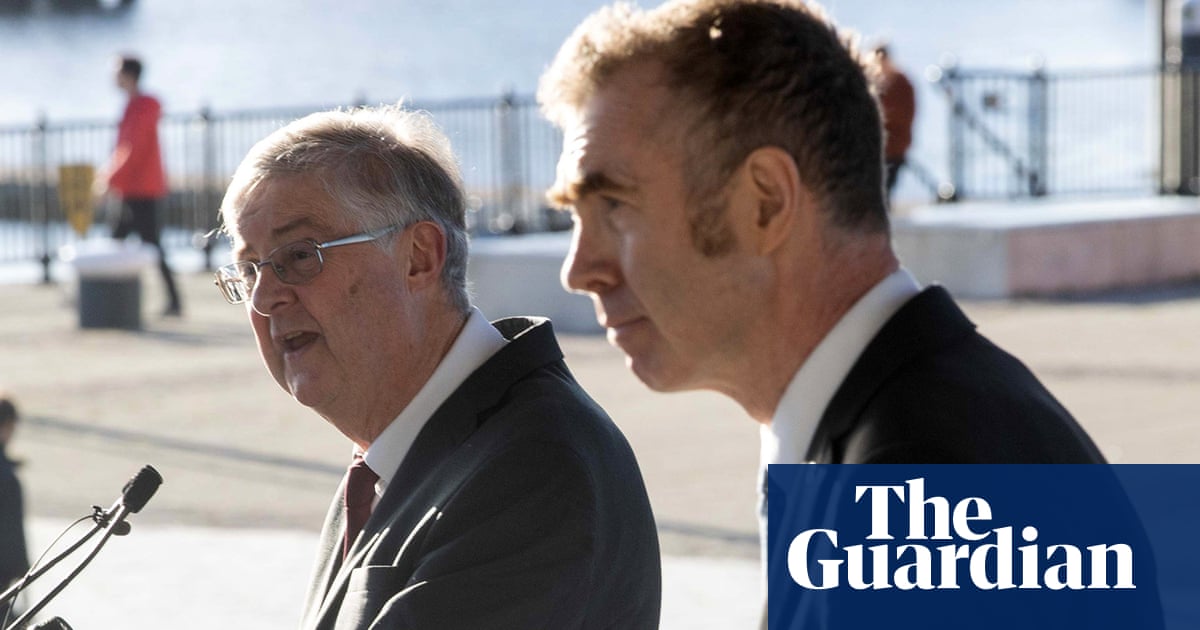 Hope it tips over into some sort of understanding ahead of a GE.

Mind, it appears my MP might be one of the silent abstainers - whereas South Pembs & Carmarthenshire is still voting for these things.
Giant Full-E+2 (2017)
Z

oyster said:
We don't want no tigger as PM. We want a mature, moral, law-abiding, intelligent, thoughtful person with a high level of leadership skills - both with colleagues and to the entire country.
Click to expand...

You, ll be lucky.. Where are you starting search, surely not in HoC?
Fact people choose politics rules 99% of them out nowadays.
You might as well search for virgin in Hull. I, m sure there are some but keeping their heads down and hiding. Just like decent folk in politics. You won't have heard of them, so again ruling them out.(or sacked like Mary Champion from front bench for being decent)
Reactions: jonathan.agnew, flecc and oyster

Danidl said:
Flecc, you continue to ignore the quantitive effect that a virus producing 1200 more active particles per second has on transmission rates. That is the difference between Delta and the versions circulating a year earlier.
Click to expand...

I haven't ignored it Danidl, and I certainly haven't continued to ignore it since I've acknowledged it in various posts.

The ignoring that's been going on is yours in ducking and diving intead of acknowledging the truth of what I've been posting about the proven efficacy of prior infection against all variations, delta included.

Forget the particulate data theory, look at the simple fact of the number of deaths which has been identical for both years in this country, one year without vaccines, one with. Even in London with 10 million people, so hardy a tiny microcosm at 17% of the rest of the country, instead of the expected far worse results due to the very high population density, very low vaccine take-up and earlier start with the virus, we haven't done any worse than the rest of the country.

Factually the vaccines haven't made any difference to the overall death rate.
.

Zlatan said:
Where are you starting search, surely not in HoC?
Click to expand...

oyster said:
The HoC also has cleaners...
Click to expand...

To be truly effective in cleaning up the House of Commons, they'd need to be psychiatrists.
.
Reactions: oyster

flecc said:
To be truly effective in cleaning up the House of Commons, they'd need to be psychiatrists.
.
Click to expand...

But you know they'd mis-read the specifications and put out a contract to hire circus performers. Probably to their friends.

flecc said:
Factually the vaccines haven't made any difference to the overall death rate.
Click to expand...

this week last November (2020), average daily deaths about 500, now about 150.
That why we had lockdown last Christmas. 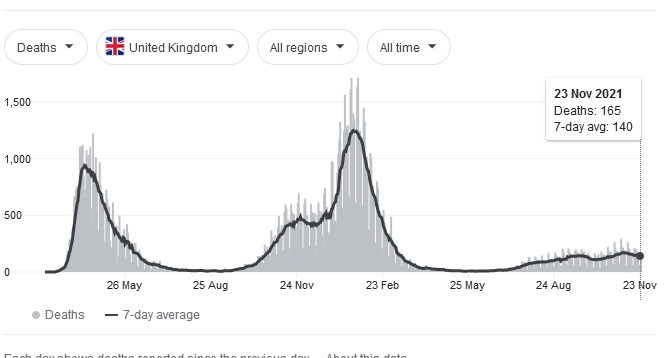 
this week last November (2020), average daily deaths about 500, now about 150.
That why we had lockdown last Christmas.

Misuse of data again, quoting just one particular week when the national rates have been increasing rapidly.

That's the end result at present.

Since the Xmas lockdown last year certainly didn't work well, the government appears to have reached the conclusion that lockdowns don't work. Perhaps that's why there isn't one now this year when infection rates are rapidly increasing here and in mainland Europe. Letting people take the hit seems to be the order of the day now.
.
Reactions: Zlatan

flecc said:
Misuse of data again, quoting just one particular week when the national rates have been increasing rapidly.
Click to expand...

I posted a graph from Wordometer showing covid deaths since the beginning.
You can see the first wave peaked 12-April 20, the second 23-Jan 21, the base of the second wave is broader, that's the effect of herd immunity beginning to show.
I predict that the next wave will peak before 23-Jan 22, the amplitude will be smaller, around 500 or fewer deaths a day, and its base will even be broader.
We won't have a lockdown and Covid 19 will peter out by May 22.

this graph is from worldometer:

From Today's a Irish Times . It was accompanied by an interesting graphic showing the inverse relationship of vaccination and deaths over all EU countries .. That data is undeniable . Vaccination saves lives even in the era of Delta.

..Ireland has the highest vaccination coverage and among the lowest death rates from Covid-19 in the European Union, according to new data. It shows that vaccination radically reduces how often people die when infected.
Ireland is first among the 27 countries with 93 per cent coverage, followed by Portugal, Malta, Denmark, Belgium and Spain, according to the comparison of national data from the European Centre for Disease Prevention and Control.
Over a 14-day period Ireland had 15 deaths per million of Covid-19. In Bulgaria, which has the EU’s lowest vaccine coverage at just 29 per cent, the rate of deaths was more than 21 times higher than Ireland’s, at 325 deaths per million over a two-week period.
Similarly in Romania, which has 43 per cent vaccination coverage, there were 267 deaths from Covid-19 per million people over a 14-day period, almost 18 times Ireland’s rate.
It came as the World Health Organisation warned that total deaths from Covid-19 could exceed 2 million by March in its Europe region, which spans 53 countries including Russia and the Caucasus.
Data showed less than half of people leave home wearing a mask, and 160,000 lives could be saved by March if the rate of mask wearing increased to 95 per cent.
“We face a challenging winter ahead,” said regional director Hans Kluge. “All of us have the opportunity and responsibility to help avert unnecessary tragedy and loss of life and limit further disruption to society and businesses over this winter season.”
European affairs ministers from the 27 EU member states met oyesterday to discuss how to coordinate a response to rising rates, with the European Commission set to bring forward new recommendations in efforts to keep travel open within and into Europe.
The EU’s digital Covid-19 certificate is also expected to be adjusted so that it can display booster shots, which some countries want to incentivise people to get. “We are working to make the booster or third dose on the certificate,” justice commissioner Didier Reynders told journalists.
Reactions: Zlatan

Sir Kier Starmer, he is getting some good words in:

Woosh said:
I predict that the next wave will peak before 23-Jan 22, the amplitude will be smaller, around 500 or fewer deaths a day, and its base will even be broader.
We won't have a lockdown and Covid 19 will peter out by May 22.
Click to expand...

Danidl said:
Vaccination saves lives even in the era of Delta.
Click to expand...

I've never contested the benefits of the vaccines in reducing deaths and serious Covid illness, which is why I've had them myself and repeatedly posted that everyone should.

The problem in here is the stubborn refusal to accept that natural immunity from prior infection is at least as effective and probably more so, also resulting in far fewer deaths. That has been officially accepted and it shows in the UK's current policy of continuing with the vaccines and boosters but without any lockdown precautions.

Although lockdown precautions like masking and social distancing must have benefits, the way in which the UK public have co-operated with them has been lacking, greatly reducing their benefits. Since those who have not co-operated and contracted the virus have largely been unaffected while gaining the very effective and socially beneficial immunity from infection, I support the UK government's approach of letting them take the hit to gain that immunity which is at least equivalent to accepting the vaccines. It's what I've been advocating for well over a year.

The great majority of the most vulnerable to death from Covid are no longer with us, now residing in the death statistics, so the current policy will not cost us the high rate of deaths previously seen. This is exactly what I've been consistently arguing since Summer 2020, take the hit and get it over with early. As London has clearly shown, that does not result in any greater death rate, it merely redistributes, more deaths earlier, less later against more virulent variants. That is what the government's chief statistician has belatedly accepted a little while ago, and it's probably behind the current approach.

Woosh, whether Covid-19 peters out early will also depend on whether the government holds its nerve and continues without any lockdown. If they panic and bring in lockdown precautions, reducing infections and the spread of natural immunity, Covid-19 could be around a lot longer.
.
Last edited: Nov 24, 2021
Show hidden low quality content
You must log in or register to reply here.
Share:
Facebook Reddit Pinterest Tumblr WhatsApp Email Link