a couple of years back I was interested in the oxygen mtb but wanted the high torque moter .

I had the bike serviced today & had the rear derailleur, cassette & chain replaced. I also had new gear cables fitted. Wow! What a difference. The changes are now slick, immediate and light. I hadn't realised how carp the changes had become over the miles.

One advisory was that I need to change the front brake pads, but I knew that anyway & was due to do it tomorrow.

I used it to do an emergency trip to the dentist today. I really pushed it hard and did 9.2 miles in 32 mins, setting 5 Strava achievements in the process!

I thought the bike was good before the service, but now realise how very good it is. With the brakes fixed it will be superb again.
2018 Cube Kathmandu Pro; Ancient Lilac Harry Quinn; Ridgeback Velocity with SRAM Automatix hub; Carrera Kraken MTB.
J

I can honestly say I love my Oxygen EMate - purchased in 2016. Mechanical discs have been ace. I have put a few upgrades on.

Kept the standard seat, same rear brake, same factory mudguards and still on original battery with circa 1000 miles on it.

I’ve changed the front disc and calipers to an AVID 200mm rotor - the stopping power is immense.

I’ve also changed the tyres - Continental Travel Contacts with liners and slime tubes. No punctures on over 300 miles so far.

It’s a superbly comfortable bike. I ride to work on it in the summer months it’s a 16 mile each way trip. Very hilly. I ride pretty much full throttle (approx 20mph avg speed) and hit 38mph on some downhills.

If I was picky I’d say I don’t like how heavy the rear end is. And I find getting the rear axle in and out the dropouts hard and it’s very difficult on the roadside. Not sure why but it’s apways been like it.

But battery life is great. I get to work with well over half battery left - I purchased a second charger and leave that one at work. I charge my battery at work now whenever I ride in. Free commuting
Reactions: Warwick and Andy Bluenoes
W

My eMate has had a dormant summer. The motor started making very worrying noises and I really didn't like riding it far. Eventually I sent it off to Woosh who replaced the nylon cogs in the hub and I fitted the wheel back on today. Thanks Tony for the repair and quick turnaround. £85 on the electric componentry in 2 years/4-5000* miles isn't bad, is it?

I was going to test it out, but the battery was flat. It's downstairs charging as I write. I'll go out on it in the morning.

I bought some WTB semi-slicks for it off another forum and fitted them. They look good and will help it roll along nicely, although only 55psi max pressure.

Will update once I've been out on it...

Update: All seems well. The new tyres will take some getting used to and the rear brake needs burping, otherwise it was performing as well as before.

The battery is coming up to 3 years old, but is still getting me to work and back with charge to spare, but a recell is inevitable. I just need to find the keys!

* I have to be vague, as the odometer has a habit of resetting itself every now and then!
Last edited: Sep 16, 2018
2018 Cube Kathmandu Pro; Ancient Lilac Harry Quinn; Ridgeback Velocity with SRAM Automatix hub; Carrera Kraken MTB.
Reactions: Andy Bluenoes
R

If any one is selling their old dead battery I wouldn't mind purchasing the case and BMS a have a go at recelling one as a spare for my bike. Also any one who's swapped out the battery completely and has it with the the frame mount and connector that would be even better. Thanks

I've lost the end of the up thumb front shifter on the left handle bar. The only markings are Shimano ACERA mega drive. Any one know the model number for these. Is it possible to just get the end lever or do I need the whole unit. I wonder if I could 3d print something and glue it on.

This is the right rear thumb shifter

You can buy any Shimano 3 speed left hand shifter. it doesn't have to ve the same type. there are loads of used oned on Ebay that don't cost much. this one is new: 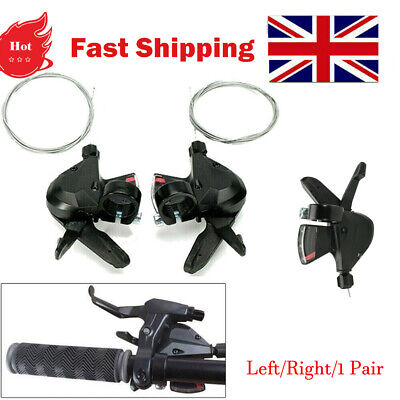 vfr400 said:
You can buy any Shimano 3 speed left hand shifter. it doesn't have to ve the same type. there are loads of used oned on Ebay that don't cost much. this one is new:

3x UNIVERSAL IMPACT SOCKET JOINT 3/8" 1/2" 1/4"Drive Wobble Swivel Extension. Spinal Air Traction Physio Decompression Back Belt Brace Lumbar Pain Lower Waist. SL-TX30 Thumb Gear Shifters 3/6 Speed Shift Lever Set Bike Derailleur Parts.
www.ebay.co.uk
I've found some polymorph thermosetting palstic left over from another project I'm going to try and remold round whats left of the old shifter and see how it hold up. Its white though so may have to try and die it black when I heat it up.
Click to expand...